While commenting on another blog, I was reminded of an old memory.

Long ago, I had a younger sister. Still do. This sister had long, beautiful hair with pretty natural curls. Everyone said so. I, on the other hand, had thin, straight hair that was shorter than hers. Something had to be done. After all, I couldn't let her be prettier and more noticed than me. I was rather vain, you see. I'm over that now.

The story continues. We were at my grandparent's house for a visit. I found scissors. A plan was hatched in my young brain. I had noticed that the neighbor's grass was quite long. Long enough, say, to hide hair once it was cut from a little girl's head. Long enough so no one would find it. Long enough so that no one would notice a young child was missing her hair. And long enough that a slightly older child wouldn't get into trouble. Yes, it was the perfect length.

I would be the most beautiful girl with the most perfect hair.

I coaxed my little sister into the long grass for her make over. She was always so passive and obedient. I set about to cutting her long locks and hiding the evidence in the lawn. We chatted. I clipped. We laughed. I snipped. Until I felt satisfied with my work. After all, just because she wasn't going to be as pretty as me, didn't mean she had to be ugly.

I hid the scissors in the grass with the hair and we went inside. I remember Grandpa saying it looked good. I remember Mom giving him the look of death. And I vividly remember the march upstairs for a spanking. A spanking with a hanger. A hanger???? Really, Mom? By the way, hangers hurt the butt regardless of how weird a tool they are for spanking.

Mom later said that they just had to trim one spot by the ear and the haircut was perfect. I was that good. And I was only three or so. Just imagine how awesome I am now! And I'm not even vain anymore.

Anyway, I also got my hair cut. And it was shorter than my sister's hair.
But probably not as nice, since someone else did it.

I am so behind in blogging! Case in point, my baby boy turned 11 on the 11th and I am just now blogging about it.

Blogging is not the only thing that has been neglected. The day came for The Boy's birthday and I had only an hour or so of time for baking his cake. I'm embarrassed to even show you this cake, but Mr Farmer insisted on taking several photos just because it looked so bad.

You see, I was distracted and didn't think and so I made the frosting before the cake was cooled. It had to sit, though I did cover it, for quite awhile. Because of this, the frosting began to get hard again. So much so that I had to put it in the microwave to soften it enough to spread it. This did not go well. It spread like poop on a biscuit, but didn't look that good. And I couldn't spread it down the sides. Here's the cake in all is gross, disgusting glory. 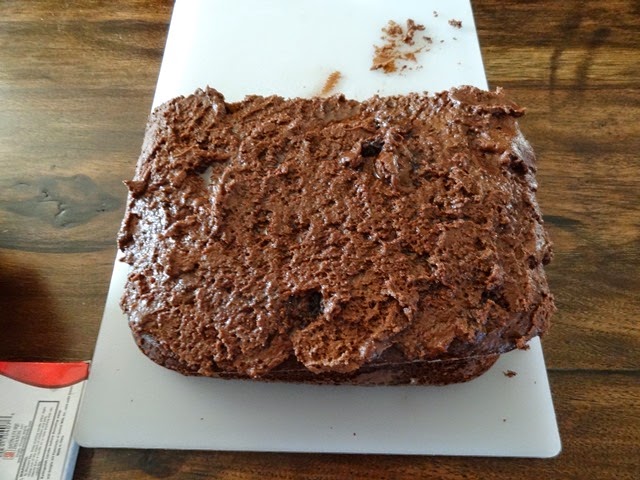 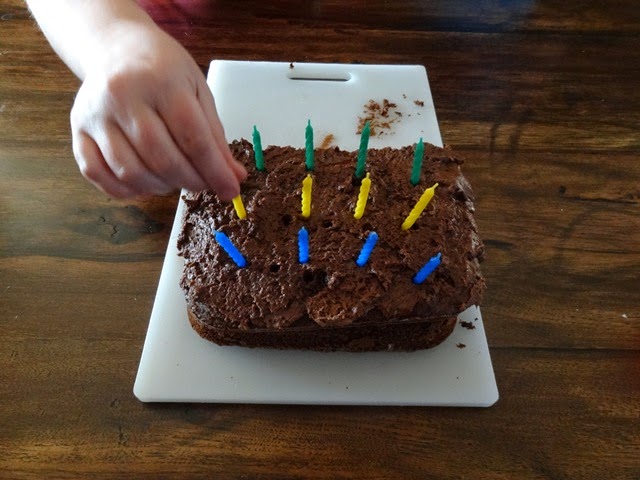 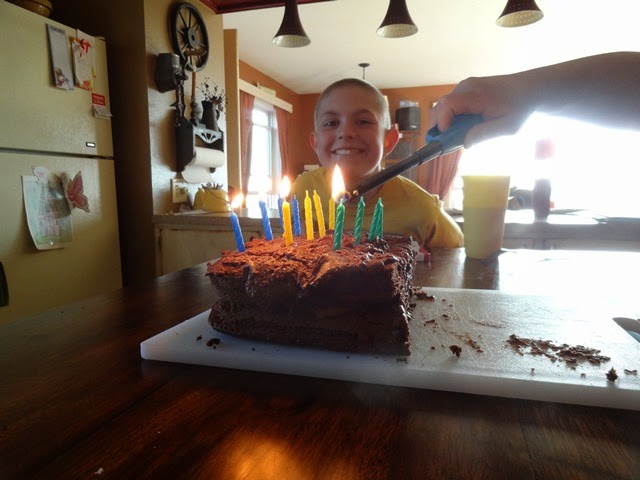 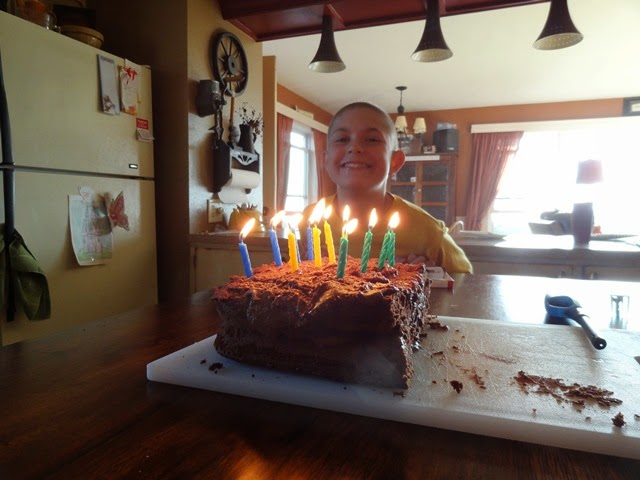 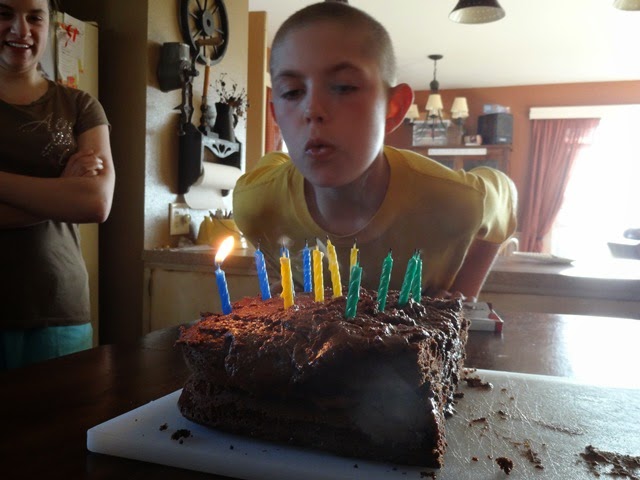 Looks aside, though, this was the best tasting cake any of us had ever had.

As always, the Boy was exceptionally grateful for his gifts. He is still the most appreciative of all our kids. Anything he receives is cherished, deeply, and for a long time. He has such a tender heart. He is still all boy, but is so sweet and loving. Such a good combination for some lucky girl's future husband. 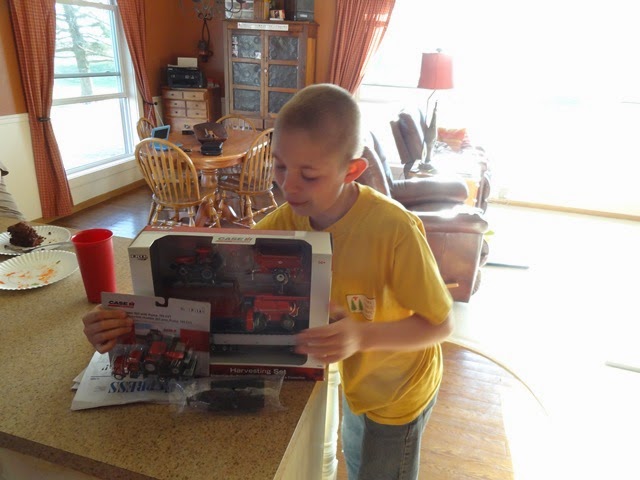 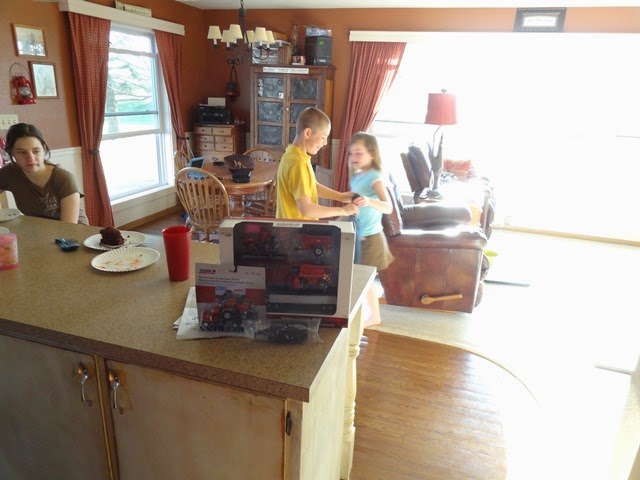 To Be Absent From The Body... 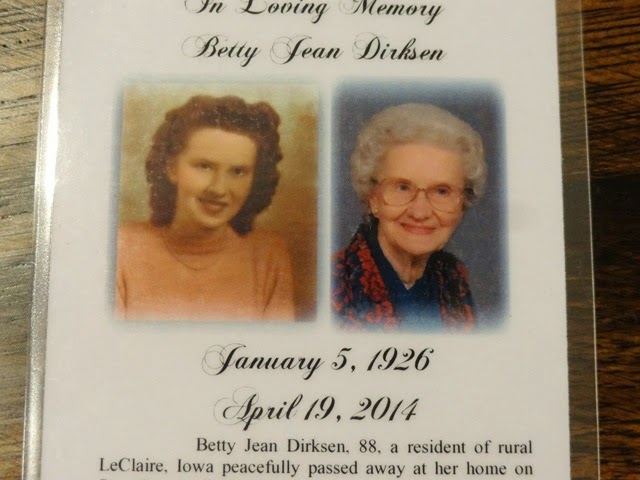 This past Saturday my grandmother went to be with her Lord and Savior. What a mixture of emotions! The sadness for the loss of such a special woman, the grief of my mother and her siblings, and my grandfather. 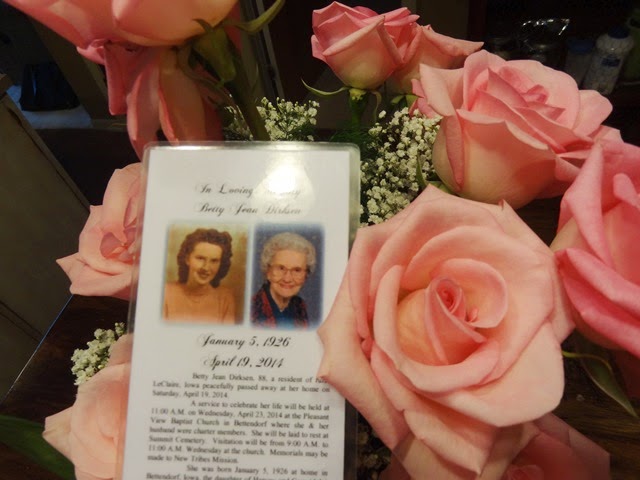 But then, the absolute excitement for her. She is finally in the presence of her Lord-- a place she has longed to be for many years. I can remember her pleading with God, "What more can I do here?", as she lay in bed, unable to go out or see or clean or care for Grandpa. As long as she was able, she spent her days sharing the Good News of Christ with anyone and everyone with whom she came in contact, even when that was only the doctors and nurses she saw.

Grandma also believed very strongly, more than anyone I've ever met, that memorizing Scripture was of utmost importance. Even though she was legally blind for the past 11 years, she still worked on her verses every day. She could only memorize a new one each week, rather than the multiple verses per week she used to memorize, but she kept at it. She always went over the old ones she had learned, too. What a blessing to have those words in her mind when she could no longer see them on paper.

My grandmother was also one to pray. She was a real prayer warrior. If you asked her to pray about something, you could count on it getting done, many times. She would often call me to ask what she could pray for-specifically- when she prayed throughout the day. If she didn't have specifics, she would still pray.

Grandma always had gardens. My favorite flower that she grew was the "Snap dragon". I loved to go outside as a child and pinch the little flowers, making them open like a dragon's mouth. She also grew beautiful roses and they always smelled great. There were vegetables, too, but her grapes were the absolute best anywhere. I think they were Concord and are tough to find around here just for eating. I tried for many years to find the exact flavor of her grapes in the stores. 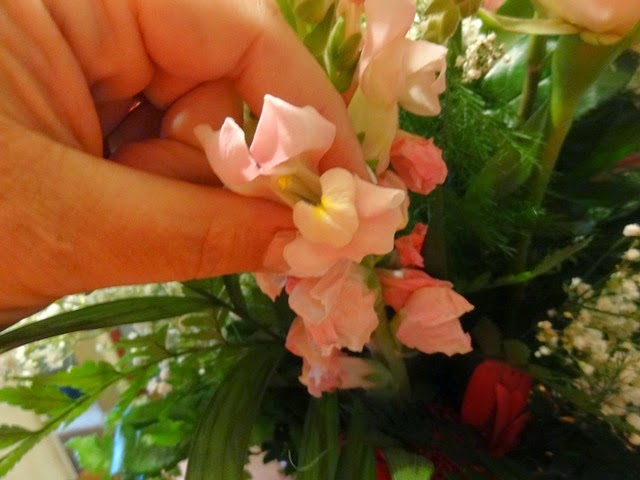 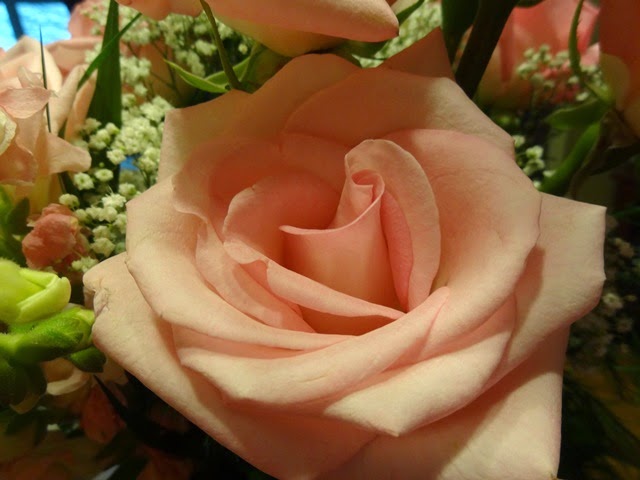 Maybe it was the era she came from, but Grandma always had an immaculate house. When I would stay with her there were daily chores to be done. I had to begin the day with washing my face, "with cold water" to make it shine. I used her Dove soap, a smell I still remember. Then, I'd slide down her carpeted stairs on my stomach and turn off the stairway lights with the push of a button. I always felt like I was running an elevator when I turned off those lights. Then, there was dusting and dishes and vacuuming to do. I once asked her why I had to vacuum the dining room since there weren't any footprints in there and you could still see the lines from the last time it was vacuumed. Obviously it was still clean. "Well, dust still falls on the carpets and needs to be picked up." I was vacuuming up dust. I'm not sure there was any dust to fall on the carpets! I remember one time when my mother found a cobweb before Grandma did. She had to call all her siblings and share the news. It was such a big deal to find any dirt or dust or cobwebs anywhere in Grandma's house. Poor Grandma! She quickly took care of the cobweb.

My grandmother was the only woman I ever heard my dad call "classy". Mr Farmer agreed and so did most who met her. The word perfectly described her. There was just something about her. She refused to gossip or even really hear it. She would listen and when you were done she'd say, "Well, now." in a dismissive tone that left you sure that you had gossiped and should not continue. But she never came out and told you that. She just had a way of saying things that left you to make the decision, but you were sure of what the right decision was.

Grandma was married to my grandfather for 67 years. Sixty-seven years! In the last few years Grandpa had to care for her and she hated that. She told me that it was her job to take care of him. She did that faithfully for so many years. I told her she needed to let him take care of her. A woman so frail and in the hospital (at the time) and yet, she felt badly that she couldn't serve my Grandpa. If only more women would find joy in serving their husbands and more men would take the responsibility to care for their wives in such a loving way!

I will miss my grandmother greatly, but I know I will see her again someday in heaven, where she is no longer in pain, and she can see her Lord and worship at his feet.
Posted by langela at 6:23 AM 17 comments: