I've recently acquired quite a few microfiber cleaning cloths. It's recommended not to wash them with fabric softener, so I have to hand wash them separately. I also hand wash my "boulder holders".

A side story. I washed my bras the other day and had them hanging in the shower to drip dry. We were expecting company and Mr Farmer asked me if I'd moved my "boulder holders". I said I did. The girls heard him say this and Sissy burst out laughing. She has never laughed so hard or long! Then she says, "That is so crude and yet so funny."

And now back to our regularly scheduled post. I came across an idea online to make your own washer, of sorts. This is what I came up with.

First, I took my craft knife and cut squares in a new, cheap toilet plunger. I think I cut 3 or 4 holes. 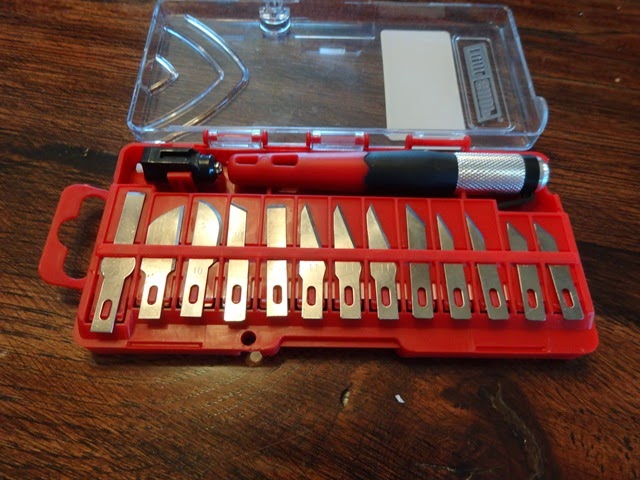 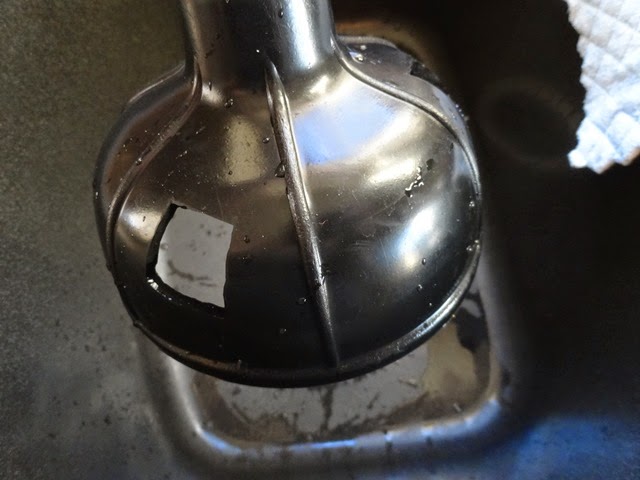 Next, I took a clean five gallon bucket with a lid. I cut a hole in the center of the lid, big enough for the plunger's handle to fit through. 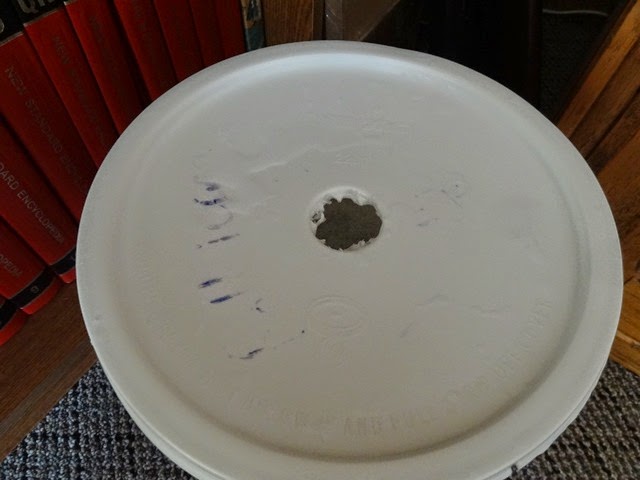 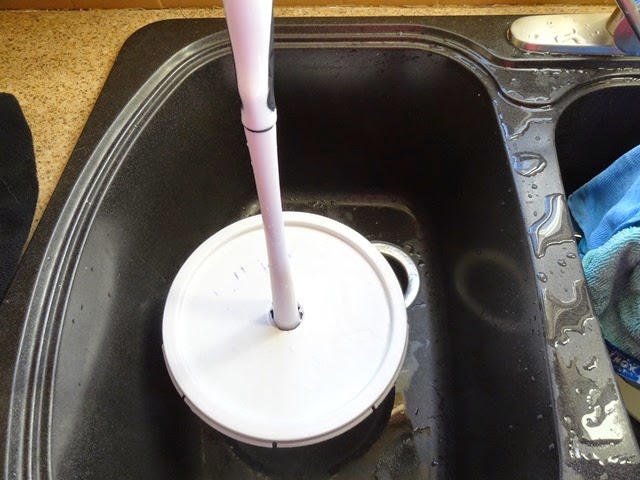 Now I just put my rags in hot water with a scoop of Oxy Clean and a few drops of Dawn dish soap. Then, I just use to plunger to agitate the rags, or "boulder holders" I set it aside and every time I walk through the kitchen I plunge it a few times. I do this for several hours, alternating soaking and plunging.

When I feel the items are clean enough, I rinse them, wring them out, and put them back into the bucket. I add hot water again and some white vinegar. The vinegar helps to thoroughly rinse the items of soap. I agitate/ plunge several times again. I rinse and wring the rags again. Finally I add the rags back to the bucket with clean, hot water. I plunge a few more times, rinse and wring and hang the items to dry. 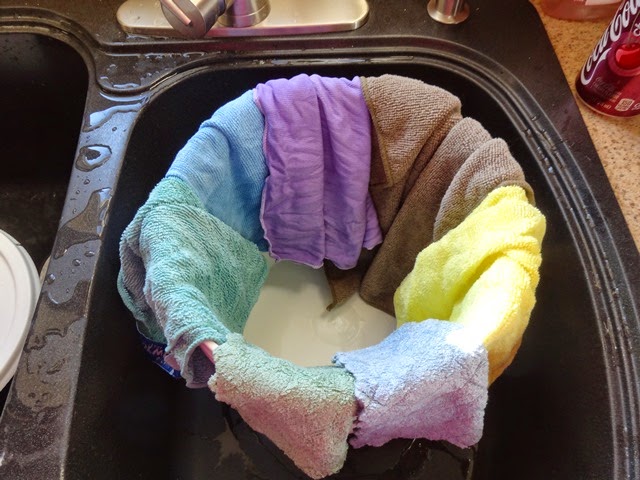 I'm amazed at how clean the rags get! It sounds, from the description I gave, that this process takes a lot of time and effort, but it really doesn't. And I save up the dirty rags to do a load at a time. If one is particularly dirty, I let it soak overnight in the bucket of Oxy and soap. This is one hack that I really like.

Do you have any favorite hacks?
Posted by langela at 4:57 AM 4 comments:

We have had so many cardinals this year. The other day I counted 8 females. There are less males than females, maybe only four. 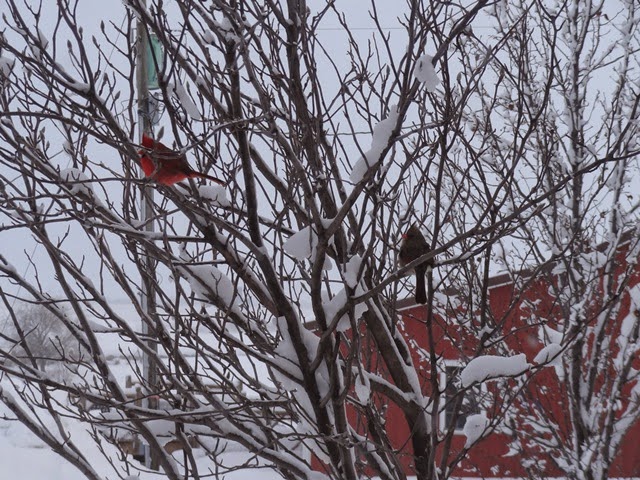 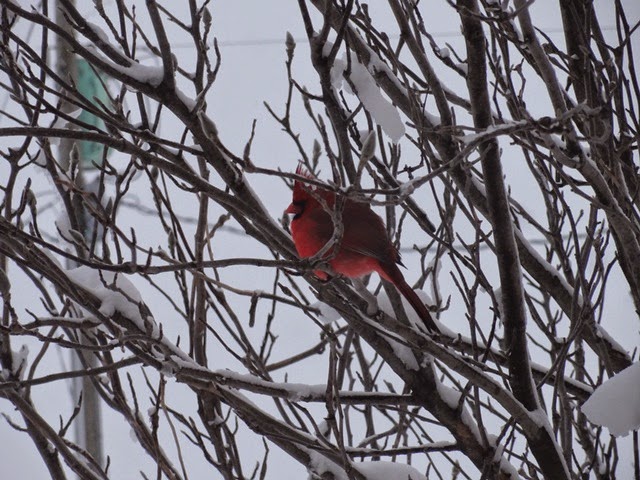 We got home from my dad's funeral the other day. I looked out the kitchen window. I saw smudges on the outside of the window and immediately thought we had had a peeing tom. Someone was casing our joint.

Then, I moved a little and saw this. I think we have one less male cardinal. Can you believe the detail left on the window? I can see individual feathers, the beak, feet, and wings. It's amazing!
Posted by langela at 10:25 AM 2 comments:

Last Monday my dad went home to be with his Lord. My dad was one of those people that everyone knew and loved. Anyone who met him was greeted with love and acceptance.

Growing up, Dad was the one I'd turn to if I wanted something. I'd snuggle close under his arm, look up at him, bat my eyes, and say, "Daaaddyy..." He'd melt and give in almost every time. Being Daddy's Little Girl was one of the best roles of my life. I felt safe and loved, accepted and cherished. Even as an adult, Dad would put his arm around me and I'd turn back into his little girl. He used to sing this little diddy to us girls when we were growing up. "Roly poly! Daddy's little fatty. Roly poly! Daddy's little girl." We never got offended at the reference to fatness because we really only heard "Daddy's little girl".

Dad was sentimental to some degree. He would carry pictures of his children and grandchildren in his wallet until they literally fell apart. He was one who'd whip out the photos to proudly show off his family. I finally took to making photo sweatshirts for his gifts. He'd wear those shirts until the photos no longer showed up. And you've never seen anyone more proud to show off a shirt! Fashion and money never meant anything to him. Family and friends were his world and we knew it.

Dad was someone different to everyone. He was a teacher. A mentor. A friend. A marriage counselor. A dad. A brother. A husband. An encourager. He was just what the person needed. He knew how to talk to people to put them at ease and allow them to open up to him so he could share in their lives however they needed him.

Dad was so giving. He had no need for money. If he'd had millions of dollars, it wouldn't have lasted long because he would have given it away. If he saw a need, he tried to meet it. If Mom wanted a new shirt, he never denied her. He'd have given away the one on his back if someone needed it. Although, I'm glad no one ever did! Dad was not a small, fit man. :)

But, what I'll miss most of all about my dad is my laughter buddy. From time to time our conversations would be serious, but mostly we just laughed. We laughed about anything and everything. My mom and Mr Farmer had to band together to try and settle us down. When that wouldn't work, they'd just comfort each other, roll their eyes together, and pretend to get upset. Dad and I never had to have something specific to get us laughing. We found humor in literally everything and played off each other to take it to a ridiculous level. There was no limit when we got together.

I will miss my dad more than I can ever express. I think many people will. But I am blessed to have had him for 41 years as my dad.
Posted by langela at 6:20 AM 6 comments:

Lester Craig “Butch” Franey, 68, of Green City, Missouri, died Monday morning, February 2, 2015 at his home.
The son of Lester Frances and Betty (Behm) Franey, he was born July 16, 1946 in Davenport, Iowa.  On May 28, 1970 in Bettendorf, Iowa he married Donna Diane Dirksen and she survives.
Also surviving are, two sons, Casey Franey and wife, Tamara of Green City and Lucas Franey and wife Angie of Indianapolis, Indiana; three daughters, Langela Richardson and husband, Mike of Seymour, Iowa, Lanida Czekus and husband, Stephen of El Paso, Texas, and Lacy Eisenburg and husband, Mitch of Clinton, Iowa; twelve grandchildren, Ryan Peeples, Trystine Franey, Keagan Franey, Trevor Schmidtke, Jack Franey, Reece Franey, Rachel Richardson, Christopher Richardson, Michaela Richardson, Autum Grau, Stephanie Grau, and Dillon Grau; one brother, Jay Franey and wife Prudence of Florida; two sisters, Kay McLean of Florida and Julie Stevens and husband Dan of Tennessee; and several nieces and nephews.  His parents preceded him in death.
Butch and Donna moved from Davenport, Iowa to Green Castle in 2000 and in 2009 to Green City.  Before his retirement in 2008 he drove a truck for ten years and previous to that he sold meat door to door.  Early in life he and Donna served as missionaries in Brazil.  Butch was a veteran of the Vietnam War serving in the U. S. Navy.  He liked to fish but the most important to Butch was studying the Bible and sharing God’s word with others.