At a recent auction I purchased five boxes of straws. They are extra long and red. Each box contains 500 straws, I think.

Anyway, today the kids were bored and so I decided to pull out a box. Sissy set to work building a house. She asked for a few tips, but mostly did it herself. 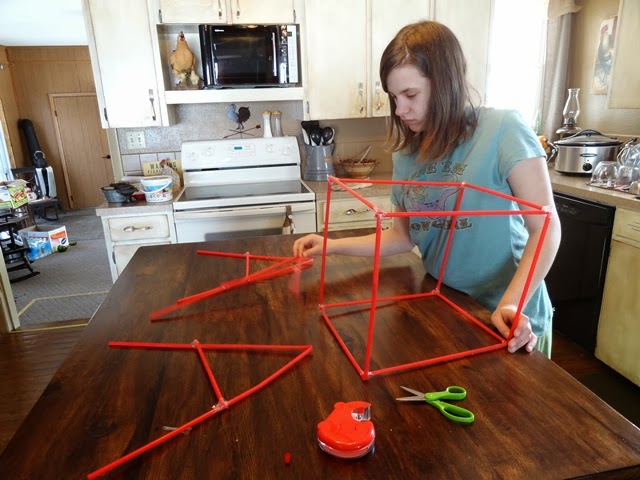 The Boy made a gun, or so he says. He didn't ask for any help. He designed and built it himself. I think he did a good job considering he is not one who usually likes to craft. 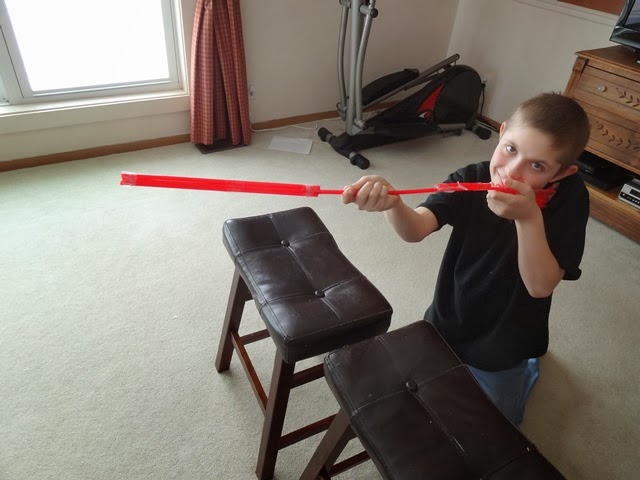 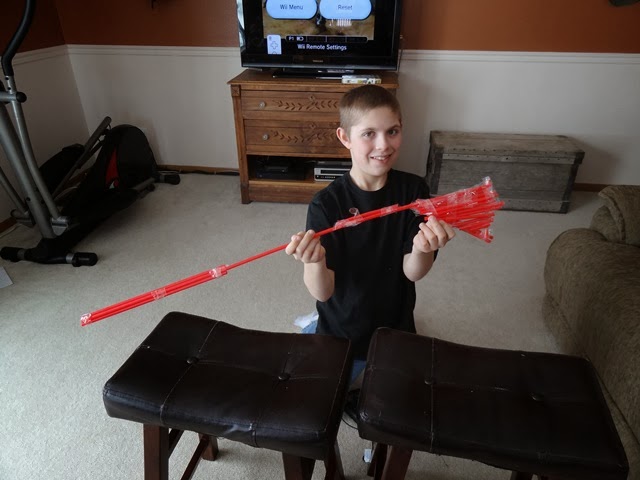 And Baby decided to make a musical instrument. I helped quite a bit with it because after we got going and I was helping to cut, she got distracted with her next idea. Her next idea was a super long straw. After trying it out for the first time and seeing there were lots of air leaks, she decided it took a lot of breath for a straw that long! She then went ot work on finding and fixing all the air leaks. I think there was more tape on the straws than there was straw! 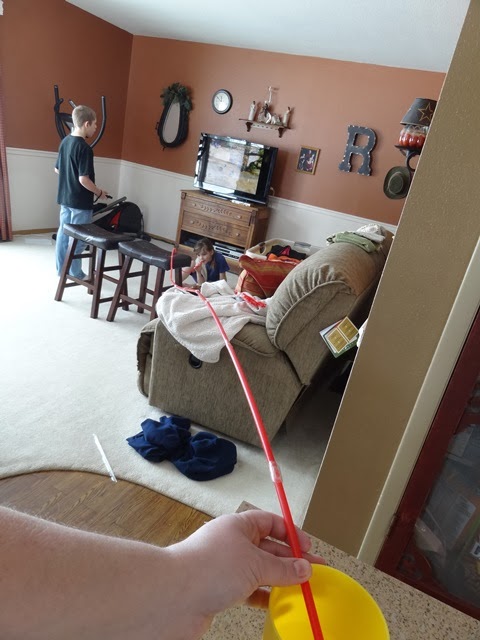 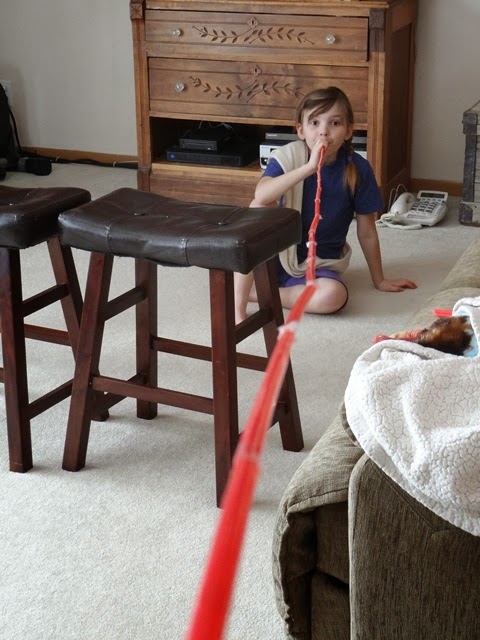 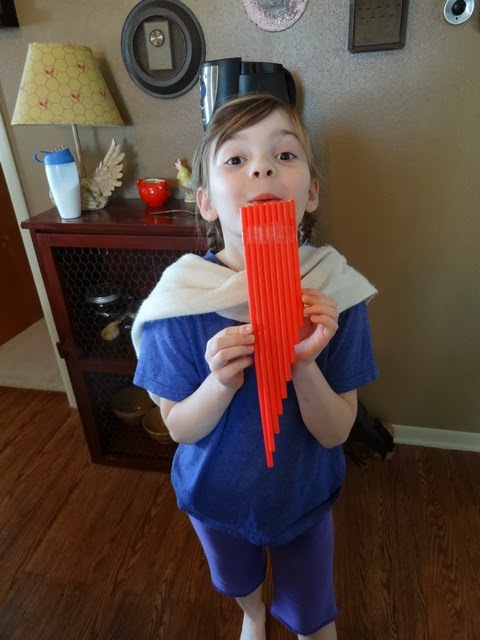 Straws kept the kids busy and made for a messy house, because unfortunately they were all individually wrapped. I like when they can use their creativity rather than just watching tv or playing video games.

While they were messing up the house, I made some cornbread. It's a sweet cornbread and is soooo delicious! I waited an entire 5 seconds to cut into it and eat a piece. It took me that long to get my Ov Glove off or the cornbread would have been in my mouth sooner! 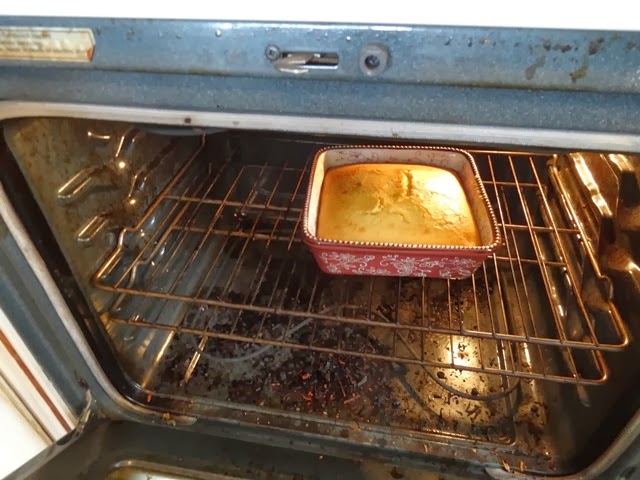 Now please feel free to keep to yourself how messy my oven is. The automatic cleaner is not working and we don't plan to have it fixed, so.....

A Room For A Princess

Go ahead and try to tell her she's not a princess. I dare ya!

I've been busy doing Baby's room. Mr Farmer wasn't sure he wanted to paint the paneling in her room since it was really nice, real wood paneling. I finally convinced him. We let Baby pick out the colors as long as they matched somewhat with the curtains I made her. She had a very strong opinion on the colors. I would pick a few that matched and she would tell me which one was the right one. It really didn't matter if I thought differently, I was wrong. The white especially had to be the perfect one even if it didn't exist. I did my best to find one that matched the curtain fabric sample I took with us, and she finally picked one that would "do". 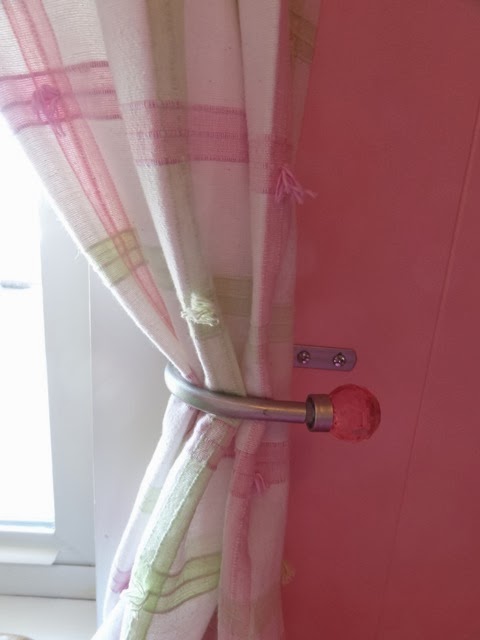 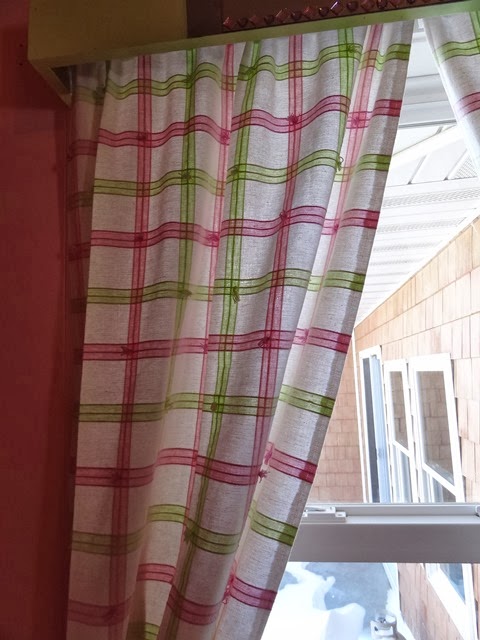 I re-used The Boy's wooden  window valance, but sanded it and repainted it. Then, Baby decided she needed a princess crown with her initial in jewels. I just used a piece of cardboard and painted it. She and I picked out the design we would use for the jewels and I attached them with hot glue. It turned out really cute, I think. I didn't want to use wood and spend a whole lot of time and money on it since she'll probably grow out of it in another year or so. 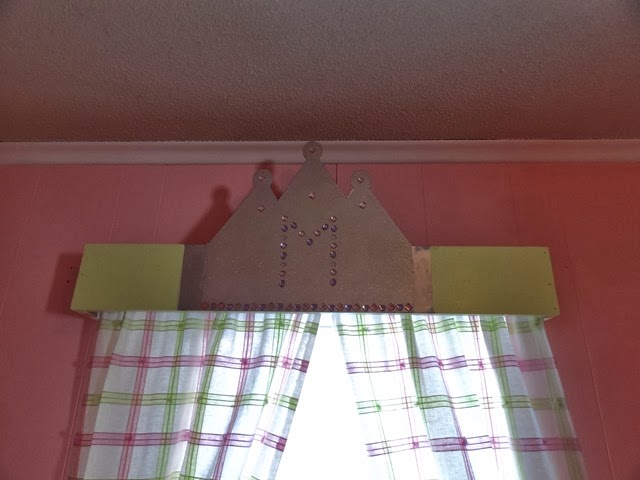 I painted the paneling with Kilz first and then painted the woodwork white and the walls pink. I found a shelf and painted it the bright green she chose. Mr Farmer thinks she needs some more things on her walls. I can't believe that came out of his mouth! 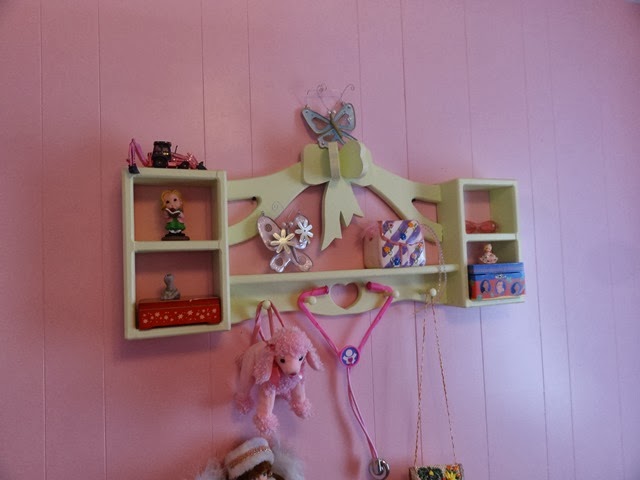 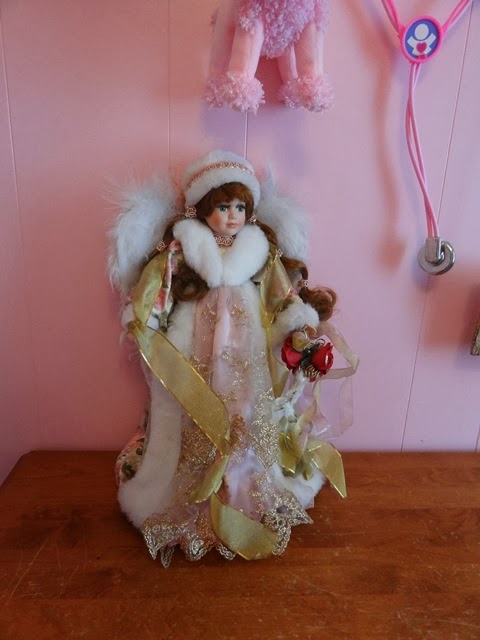 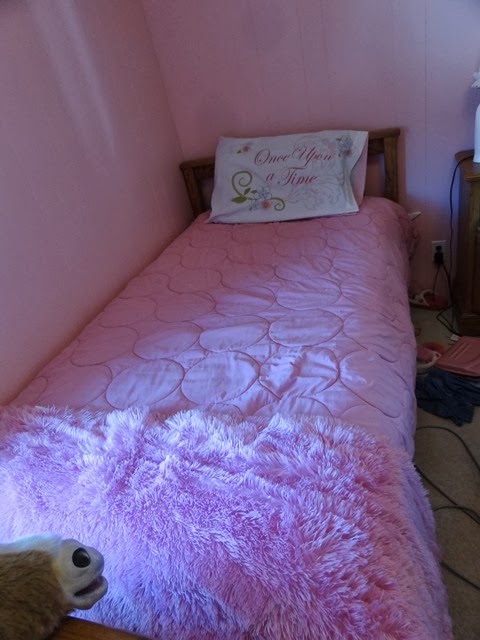 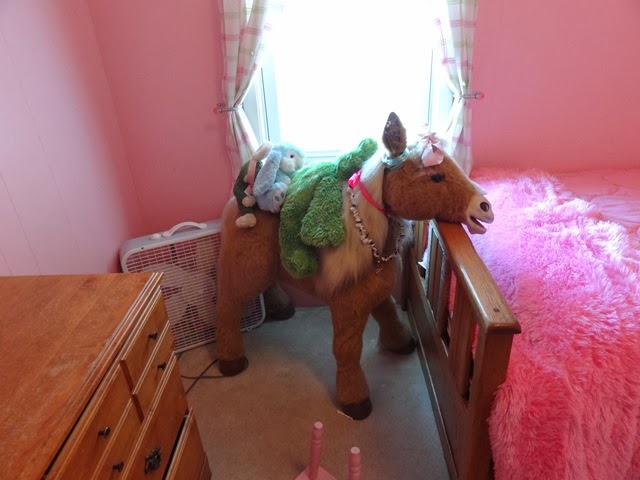 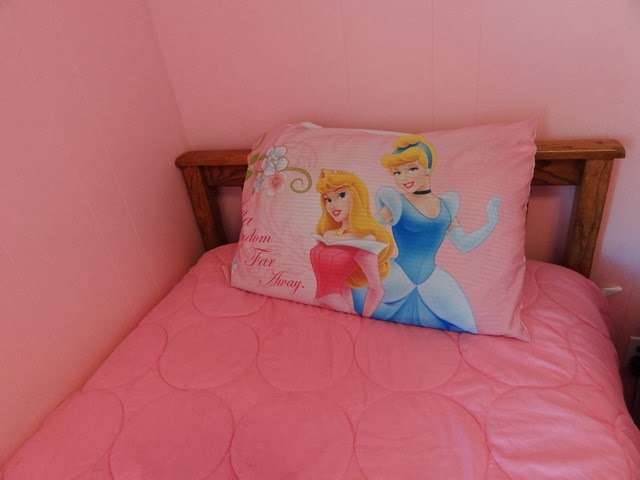 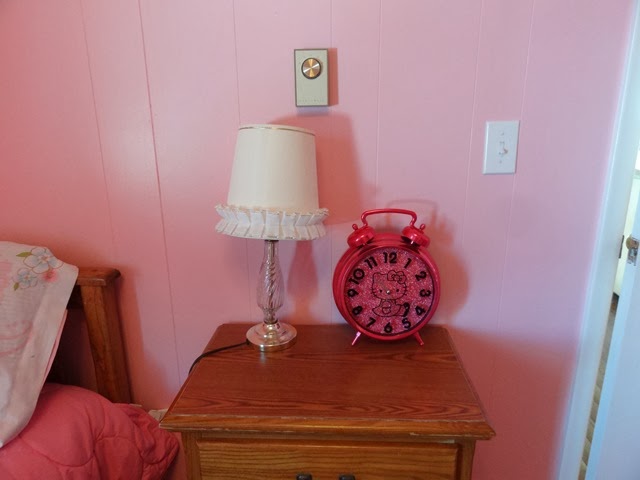 I took the closet doors off since they were always getting knocked off their tracks anyway and moved her desk into the closet. Her room is quite small and was always messy. I took out the shelf in here, too. I wanted to paint the inside of the closet area in the bright green, but ran out since that wasn't part of the initial plan, so that may or may not get done someday. 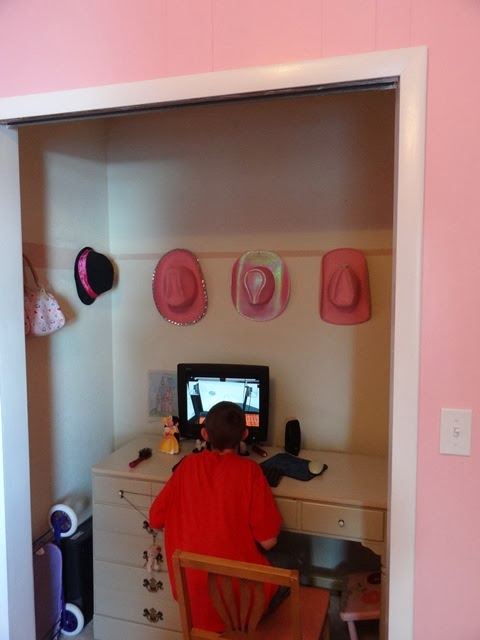 Since getting her room redone, Baby has kept it clean and has even organized it further. She was our hoarder, but seems to have turned a corner. She took me in one day to show off her drawers and nightstand. I told her I was proud of how nice they looked. She said, "I figured it was time to grow up." Now if she could just convince the other two of that!
Posted by langela at 9:16 AM 9 comments: