Snowman- A Play By Play

The other day, we had our first real snowfall of the season, maybe of the last two years. It's been really dry here. Anyhow...

The kids wanted to make a snowman. Since I'm looking for any excuse to get them outside and exercising a bit, I told them to go for it.

They got all bundled up and headed out. First, they rolled a couple of large snowboulders. Then, they stacked them. Apparently, having lived a sheltered life has hurt their knowledge of the exact shape of a snowman. They proceeded to smooth all the roundness and make the snowman into a snow tower. They needed me. "Mama's coming!" I called to them. It's so nice to be needed. I rushed to the window. I'm not crazy enough to actually go outside, after all. I threw open the window and instructed them in the correct technique for making their tower into a recognizable snowman. I shut the window.

After a few hand gestures to continue my instruction from the warmth and quiet of the house, the kids finally got the hang of it. They were on their way.

Next, they needed to add a face and arms. The arms were first. Baby and the Boy went off to find suitable sticks for arms, while Sissy finished the body shaping. After consulting together on proper arm placement, the Boy placed the first one in. Baby promptly pulled it back out, discussing why it wasn't right. She stuck it in in a different position and headed around to the other side. The Boy obviously didn't agree with the new placement and pulled it out to reposition it. Meanwhile, Baby was sticking the arm in the other side. Diligently working, Baby went off to find rocks for the face. In her absence, the Boy went around to the other arm. Something didn't look right. The arms didn't match. So he pulled it out and repositioned it to match the other side. About this time, Sissy finished up the sculpting. She went to the first side and saw something was terribly wrong. The arm was obviously not done right. If she wanted something done right, she'd have to do it herself. Out came the arm.

Baby returned with her rocks and started on the face. Sissy finished one arm and went around to check the other side, just as the Boy went to the first arm, to check his work. Hmmm, something was wrong. They didn't match at all. What happened? Oh well, he'd just pull it out and do it again. Sissy was beginning her work on the second arm. Now it was just right. She stood back and noticed the first arm looked off. (The Boy was off with Baby to find some hair for the snowman.) She finished and stood back to admire her work. The Boy and Baby came back with more materials. Something was wrong. The Boy went around to the second side, noticing the arm wasn't right. He and Sissy collaborated and went back to work together to fix it. At the same time, Baby was fixing the first arm again. Absently, they switched sides and re-did the work done by the other.

Now, I realize this recap is dizzying, but I am actually not exaggerating how it went. They did and re-did those poor arms so many times, never fighting or even realizing someone had re-done their work. It was hilarious to watch!

Finally, they were satisfied the arms were just right and all came together to do the hair. The Boy started with sticks for a very imaginative mohawk. I was impressed at his creativity. The girls then added sprigs of evergreen for additional hair. Very cute. Sure their poor snowman would get a cold, the girls figured he needed a hat. Baby selflessly offered hers. Out came all the hair. 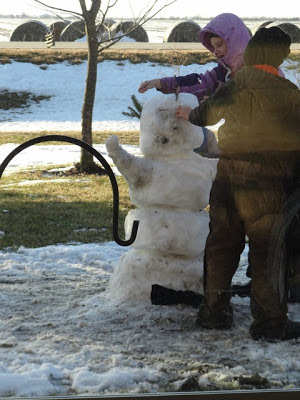 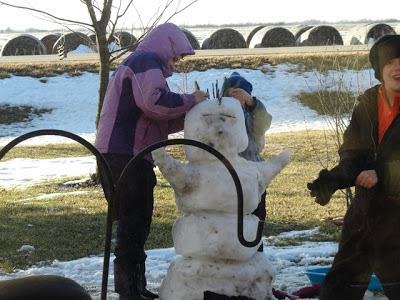 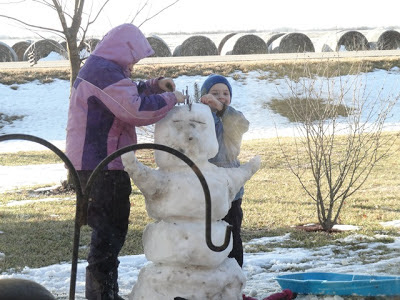 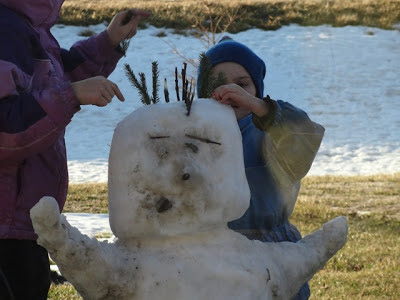 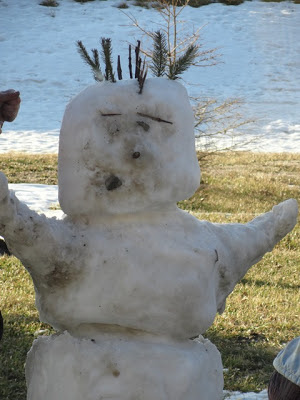 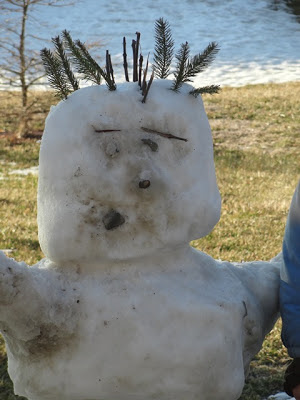 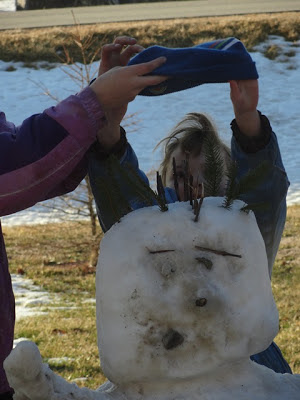 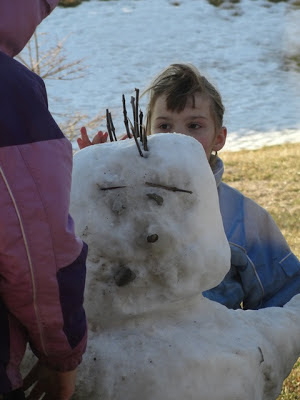 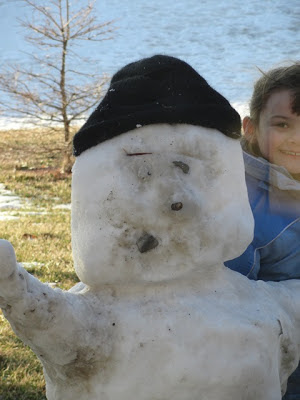 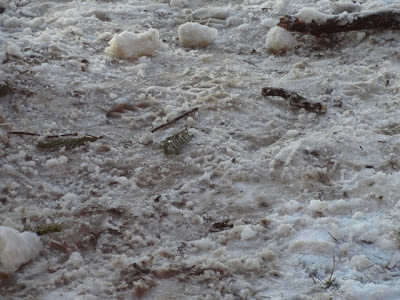 And there you have it. A snowman. Time to pose for the camera. 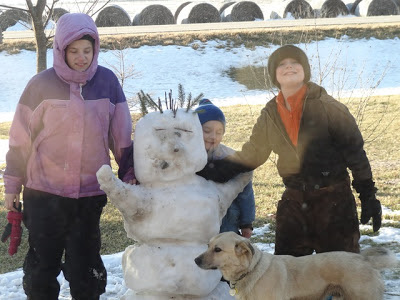 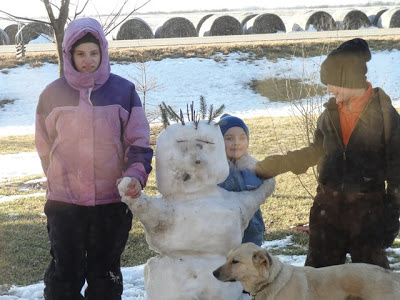 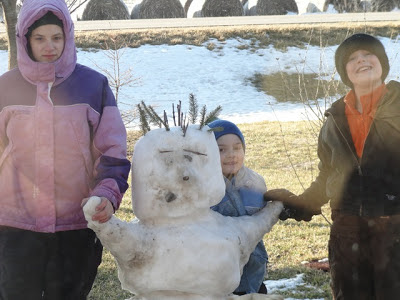 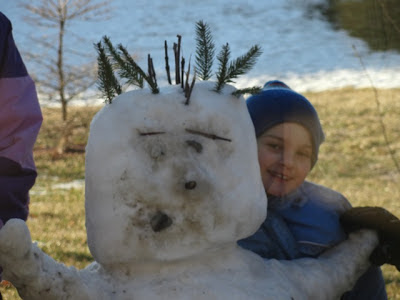 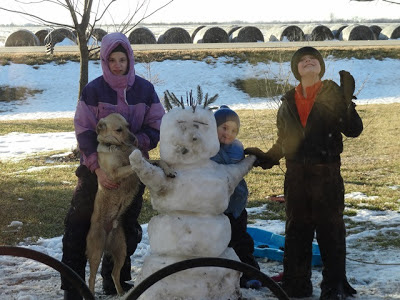 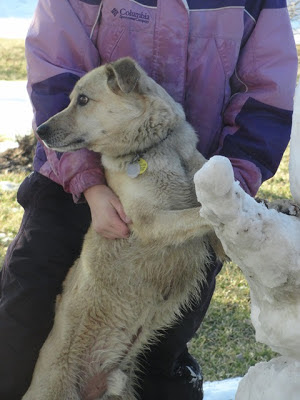 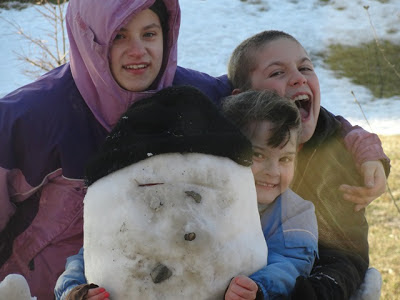 But something was missing. Ahhh, yes. He needed a sled. But it wouldn't stand next to him with that big arm out there. Off. Came. The. Arm. For the last time. 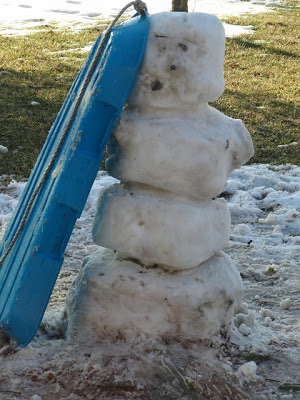 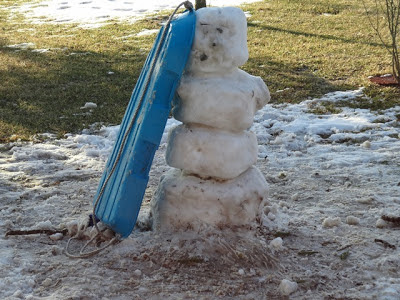